Welcome to the home page of Nestlings Press, a small Toronto-based publishing house specializing in humour.

PLEASE NOTE that we mail only to Canadian addresses.

Nestlings Press has now reached 23 titles (and counting). All are available from this website through the use of PayPal. You don’t need to join PayPal; you can simply use your credit card. We will mail out the books promptly on receiving your order. As stated above, for copyright reasons we cannot mail these books outside Canada – but if you have a friend with a Canadian address, we will be delighted to brighten his or her day.

All the books are beautifully printed by Coach House Books in Toronto, with colour covers and black-and-white interiors, and are written and/or edited by Warren Clements.


TO ORDER A BOOK, PLEASE CLICK ON THE COVER OF THAT BOOK BELOW. 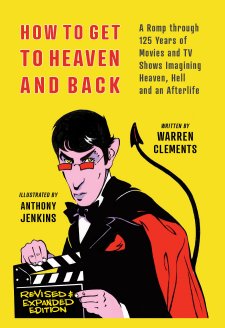 How to Get to Heaven and Back (2020, 272 pages, $23.95, 6 inches wide by 8.75 inches tall)
This one is for movie and TV buffs, revised and seriously expanded from the 2014 edition and boasting new caricatures by Anthony Jenkins. With humour and scrupulous accuracy, it looks at movies and TV series from the past 125 years imagining Heaven, Hell, ghosts, angels, reincarnation and all things afterlife, from the pre-1900 stop-motion demons of France's Georges Méliès to the TV series Lucifer and The Good Place, with pride of place for Here Comes Mr. Jordan, Heaven Can Wait, Beetlejuice and (the original) Bedazzled.
Also available: the original edition of How to Get to Heaven and Back (2014, 144 pages, $16.95, 5 x 8), with illustrations by the author. 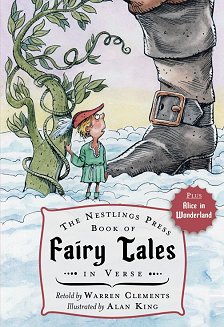 The Nestlings Press Book of Fairy Tales in Verse (2020, 128 pages, $19.95, 6 x 8.75)
Twenty well-known fairy tales (Jack and the Beanstalk, Sleeping Beauty, Rumpelstiltskin, The Pied Piper of Hamelin etc.) are faithfully retold in rhyming verse, intended to be read aloud ("Snow White kissed the prince and she hugged the wee men/ And as for strange apples, swore off there and then"). Also here are four non-fairy-tale classics (Peter and the Wolf, King Midas, Pandora's Box, Rip Van Winkle) and a twelve-page versified version of Alice in Wonderland. With ten full-page illustrations by Alan King.

The Many Worlds of Walter Trier 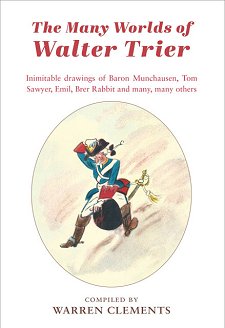 The Many Worlds of Walter Trier (2019, 176 pages, $22.95, 6 x 8.75)
Walter Trier was a major illustrator in the first half of the twentieth century, starting off in Germany, fleeing the Nazis to spend a dozen years in Britain, and ending his all-too-brief life in Canada, where he did some of his best work. This book collects his best black-and-white work (illustrations for books such as Emil and the Detectives, work for Britain's Lilliput magazine) and has a 16-page colour section in the middle with highlights from such picture books as The Animals' Conference, Puss in Boots and Munchhausen. Excerpts from the stories accompany many of the illustrations.

A Fourth Round of Aesop, ASAP (the latest of the Aesop books) 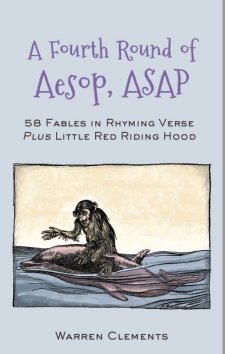 Treasures in the Antic 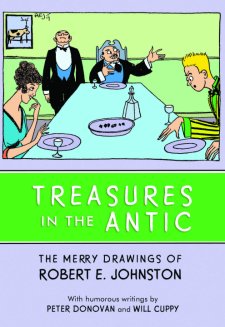 Treasures in the Antic (2018, $19.95, 128 pages, 5.5 x 8)
Robert Edwin Johnston was a skilled illustrator whose witty, fluid line drawings accompanied humour columns by Peter Donovan (pseudonym P. O'D) in Saturday Night magazine in the 1910s and 20s. He was also, as it happens, the brother of Frank/Franz Johnston of the Group of Seven. His illustrations are gathered here, along with excerpts from Donovan's columns and a few compatible writings by Will Cuppy. You'll be astonished by how good this largely unknown work is.

How You Can Tell You’ve Moved Next Door to Satan 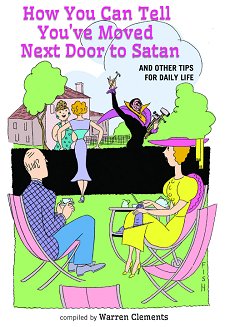 How You Can Tell You’ve Moved Next Door to Satan (2018, $20.00, 176 pages, 5.5 x 8)
looks at ways you can tell you have a bad lawyer, a romantic partner isn't right for you, someone is too much of a perfectionist and, of course, you've moved next door to Satan. (The lawn sign reads, "Beware of God.") With illustrations by Anne Harriet Fish and W. Heath Robinson. 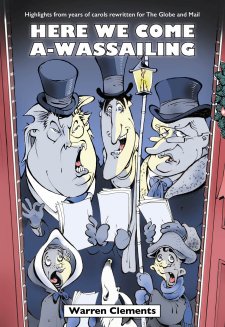 Here We Come A-Wassailing (2018, $16.95, 120 pages, 5.5 x 8)
On Dec. 24 for the past three decades, the editorial page of The Globe and Mail had made way for a series of Christmas carols rewritten to reflect the big news stories of the past year. This book collects all the carols from 2008 to 2017 inclusive, with a few other carols from the years before and several others that couldn't squeeze onto the page, all annotated to help readers remember what each story was about. Donald Trump figured largely near the end. "Crass T., the showman,/ Spent a busy year in power./ He would send a tweet,/ Then he'd pause, repeat,/ Trolling critics by the hour..." Each chapter has a decorated initial letter by John (Alice in Wonderland) Tenniel. 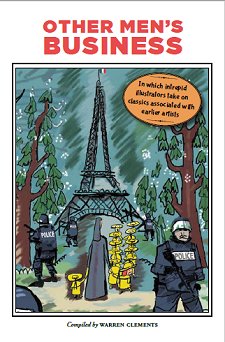 Other Men's Business (2017, $14.95, 70 pages, 6 x 8.5)
This was a bit of a stunt book. We asked illustrators to pick a story that was out of copyright in Canada but not elsewhere, and to illustrate it. So, George A. Walker chose two cautionary verses by Hilaire Belloc, Julian Mulock provided two illustrations for T.S. Eliot's book of cats, Philip Street chose Thurber's Secret Life of Walter Mitty, Alan Stein chose a Dylan Thomas poem, Anthony Jenkins chose the first Babar book and Winnie-the-Pooh, and so forth. Excerpts run with the drawings. The title refers to Punch magazine's affronted 1907 review of Arthur Rackham's illustrations for Alice in Wonderland - that they were okay, but that John Tenniel's originals were matchless, and that Rackham should "employ his imagination upon his own rather than other men's business."

Thirty Thousand Pigs: And Decades of Other Hilarious Errors That Slipped Into Print 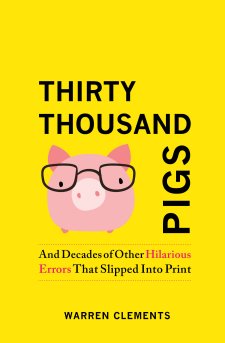 Thirty Thousand Pigs: And Decades of Other Hilarious Errors That Slipped Into Print (2017, $19.95, 152 pages, 5.5 x 8)
Warren Clements wrote the Word Play column for The Globe and Mail for a couple of decades, and regularly came across typographical errors and blithe misstatements that were, in addition to being wrong, howlingly funny. Readers would send in examples, and this book collects them all, in context and with commentary. A treat for word lovers. The title refers to an Australian newspaper's 2011 report of a farmer's comment after a horrendous flood. The flooding was so bad, he said, that "thirty thousand pigs" were floating down the river behind his home. The paper ran a correction the next day. What the farmer actually said was "thirty sows and pigs."

Eight Ways to Kill Off Classic Literature: And Other Unexpected Light Verse 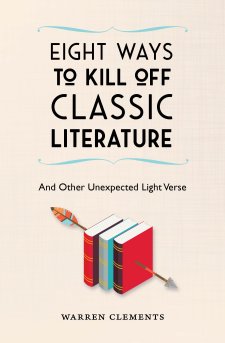 Eight Ways to Kill Off Classic Literature: And Other Unexpected Light Verse (2017, 1995, 88 pages, 5 x 8)
A book of light verse, some of it previously published in The Globe and Mail, The Spectator, The New Statesman and The Washington Post. From The Day Noel Coward Dropped By: "Welcome to the manor house,/ Where manners are hard to discern./ For you see, we haven't got any,/ But we have bad manners to burn." And, from the title poem: "Big Brother has been overthrown/ By democratic vote./ So, Winston Smith, you're on your own./ Feel free to rock the boat."

News of the Day, Lustily Shouted 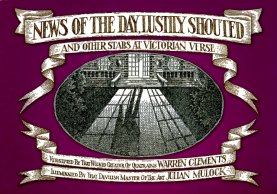 News of the Day, Lustily Shouted (2015, $16.95, 80 pages, 7 x 5 horizontal)
This book is gorgeous, from its maroon cover to its three dozen detailed pen-and-ink illustrations by Julian Mulock and its wickedly witty verses written in Mulock's calligraphy, about the mean streets of late Victorian London. "A bank was robbed in heavy fog./ The witness was a wary dog./ It recognized the robbers' scent/ But wouldn't show which way they went."

Bird Doggerel (2012, $12.95, 120 pages, 5 x 8)
This loosely connected series of stories has, as their main character, Charles Arthur, "a man to whom things happen." He is dragged into surprising adventures by his friend, Mr. Finch, and always, in the back of his mind, wonders what happened to his parents, who ran off to join the circus. (He was left in the care of his aunt, who was eaten by penguins. Very rare, but apparently it happens.) Amusing, and always unexpected. Copiously illustrated by the author.

Meet the Shakespeares (2012, $14.95, 168 pages, 6 x 6)
Fifteen of Shakespeare's plays are rewritten as six-to-ten-minute musical skits with several songs each. (Rosencrantz and Guildenstern, in Hamlet: "Who must I sue to get out of this play?/ The way things are going, I won't live out the day.") Plus: a half-hour musical pilot episode based on Hamlet. The narrator keeps things scrupulously honest, but the songs frequently take humorous liberties. With several double-page illustrations by Brian Gable.

The Charles Arthur Stories (2012, $12.95, 120 pages, 5 x 8)
This loosely connected series of stories has, as their main character, Charles Arthur, "a man to whom things happen." He is dragged into surprising adventures by his friend, Mr. Finch, and always, in the back of his mind, wonders what happened to his parents, who ran off to join the circus. (He was left in the care of his aunt, who was eaten by penguins. Very rare, but apparently it happens.) Amusing, and always unexpected. Copiously illustrated by the author.

If Famous Authors Wrote Nursery Rhymes (2012, $12.95, 120 pages, 5 x 8)
contains a hundred or so nursery rhymes the way famous authors might have written them. With caricatures by Anthony Jenkins of Hemingway, P.G. Wodehouse, Leonard Cohen and others, and a glossary at the back with original versions of the rhymes.

Gulliver's Day Trip, and Other Literary Flights of Fancy 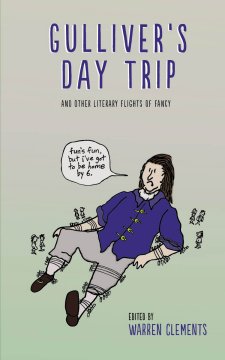 Gulliver's Day Trip, and Other Literary Flights of Fancy (2013, $12.95, 120 pages, 5 x 8)
collects challenges with a literary theme, such as imagining how the laws of the land might have interfered with well-known tales. (From entrant Cherry Watson: "Your majesty, you are charged with trespass, property damage to multiple thorn bushes, and sexual harassment for kissing a sleeping princess.") Illustrated with episodes of the comic strip Nestlings on literary themes.

A Fine Line: The Caricatures of Anthony Jenkins

A Fine Line: The Caricatures of Anthony Jenkins (2013, $19.95, 120 pages,8 x 8)
Anthony Jenkins, for forty years an illustrator and editorial cartoonist with The Globe and Mail, is one of the world's best caricaturists. This book collects more than 100 full-page examples, from the worlds of politics, science, literature and the cinema. Jenkins provides commentary on many of the drawings, such as the one of Bob Dylan ("Sometimes I combine different feels and 'textures' for effect - or just to see what happens. Here, the hair is done in brush to contrast the fine pen lines of the features"). With an introduction by Douglas Gibson, editor of the work of many of Canada's best writers and a first-class writer himself (Stories About Storytellers).

When Tom Met Alison: A Fisher Collection (2013, $19.95, 120 pages, 8 x 8)
Philip Street's comic strip Fisher appeared in The Globe and Mail for twenty years, with Tom and Alison running interference with each other, their roommates, their business colleagues and a personal digital assistant named Bixby (long pre-dating Samsung's Bixby, it should be noted). Combining humour and social commentary, it remains a treat, not least for the cartoonist's way with a brush stroke. With a foreword by artist Barbara Klunder ("Cool lines, both drawn and spoken"). 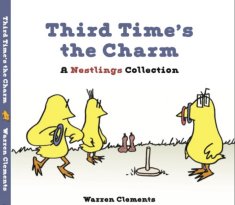 Third Time's the Charm: A Nestlings Collection (2014, $19.95, 120 pages, 8 x 8)
The comic strip Nestlings ran in The Globe and Mail from the late 1970s to the mid-1980s, and again in the 1990s. The subject was simple: the interaction of three birds (Robin, Fletcher and Theodore) and the other inhabitants of the forest - the worms, the squirrel landlord of their tree, and the surly manager of the worm store. This book includes more than 300 strips, with occasional commentary by cartoonist Warren Clements.

THE PAYPAL OPTION LETS YOU USE A CREDIT CARD WHETHER OR NOT YOU BELONG TO PAYPAL. TO ORDER, PLEASE CLICK ON ONE (OR MORE) OF THE COVERS ABOVE.

You may also pay by (Canadian) cheque. Add 5% to the cover price for the tax and another $3 for postage (or $5 each in the case of the hefty The Many Worlds of Walter Trier and How to Get to Heaven and Back), make the cheque out to Warren Clements, and send it to: Nestlings Press, 119 Spadina Ave., PO Box 252 TORONTO B, Toronto, ON M5T 2W1.