The Charles Arthur Stories , written and illustrated by Warren Clements , consists of humorous interlinking tales of Charles Arthur, a man to whom things happen. From the back cover: His parents ran off to join the circus. His aunt was eaten by penguins. His dog rips up the house looking for bones. And a man named Mr. Finch, who dresses entirely in black, keeps urging him to go on expeditions to the outside world. 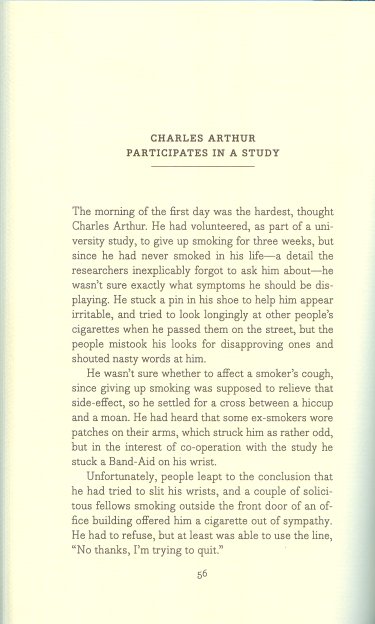 “Trick or treat!” cried the happy goblins outside Charles Arthur’s door.
Charles opened the door with a bowl of candy kisses in his hand. “Oho!” he cried in return. “Three little goblins! And who might you be?”
The goblins looked at each other. “You’d probably find the names impossible to pronounce,” said one of them. “Goblin names always are.”
“Of course,” chuckled Charles. “Would you like some candy?”
“Goblins don’t eat candy,” said the second of them. “Especially on All Hallows’ Eve.”
“We prefer live cats,” said the third, “or the cream of lush forest glens with the dew still fresh.”
Charles Arthur was taken aback. “I’ve just made a garden salad,” he said.
“That’ll do,” the goblins cried in unison. They barrelled through the door and headed for the kitchen. Charles, who hadn’t counted on visitors, shut the front door and followed them anxiously. When he reached the kitchen, the third goblin was sliding a long, slimy, distinctly unchildlike finger around the salad bowl, mopping up the last trace of a treat Charles Arthur had spent three hours preparing.
“That was my dinner,” he said in horror.
“And an excellent one it would have been,” said the first goblin. “What else do you have?” He glanced hungrily at the refrigerator.
“Do you kids live in the neighbourhood?” Charles asked suspiciously.
“Could be,” said the second goblin. “What’s a neighbourhood?”
“We live in a lair three fathoms deep,” said the third, “beneath the oak and maple steep.”
Charles Arthur noticed that what he had taken in the dim light of the doorway to be an ornate set of stockings was, in fact, skin, or a distant cousin thereof. “How long,” he asked, trying to keep his voice in check, “do you plan to stay here?”
“Details, details,” said the first goblin.
“Until you answer us riddles three,” said the second.
“Three riddles,” said the third, “that have stumped better fellows than thee through the centuries.” The three broke into raucous, unpitying laughter.
[continues]