The Many Worlds of Walter Trier

NOTE: FOR COPYRIGHT REASONS, THIS TITLE MAY BE MAILED ONLY TO CANADIAN ADDRESSES. 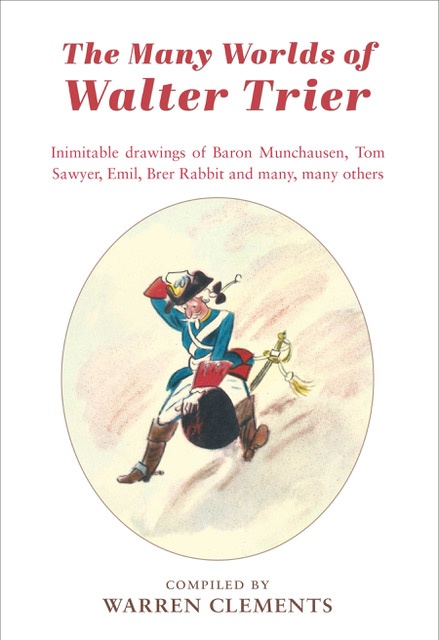 Walter Trier was an illustrator famous in Germany beginning in 1910, and then in England, and then, all too briefly, in Canada. He illustrated Erich Kästner’s 1929 book Emil and the Detectives, which kicked off decades of boys’-own adventure books. After fleeing the Nazis in 1936, he made such an impression painting the first cover of Britain’s Lilliput magazine that Lilliput asked him to paint every other cover until 1949. By then he was living with his wife in a chalet he had built near Collingwood, Ont., and was illustrating such gorgeous picture books as Till Eulenspiegel, Baron Munchhausen, The Animals’ Conference and Puss in Boots, all written by Kästner. He died unexpectedly in 1951, at age 61.

Except for a short Art Gallery of Ontario catalogue from 1980, there has been no substantial English-language collection of his work until now. The Many Worlds of Walter Trier reproduces a number of his German magazine covers and Lilliput covers, but mainly it reprints more than 150 of his book illustrations (including 16 pages in colour). They include the titles mentioned above, Tom Sawyer, Brer Rabbit, and his own books Dandy the Donkey and Dandy at the Circus. He illustrated Kästner’s Lisa and Lottie, which was the basis of the 1961 Disney film The Parent Trap with Hayley Mills (and its remake with Lindsay Lohan). Trier’s great-grandsons Matthew and Michael Fodor contribute a foreword; they were born too late to know Walter but knew his widow well and played in the chalet he built.

An issue of Lilliput in 1938 described Trier as “a fine painter with the heart of a child, and with the rare, childlike gifts of simplicity and good humour. He has, too, a child’s keen observation and sense of fantasy which can be seen in all his imaginative work.”