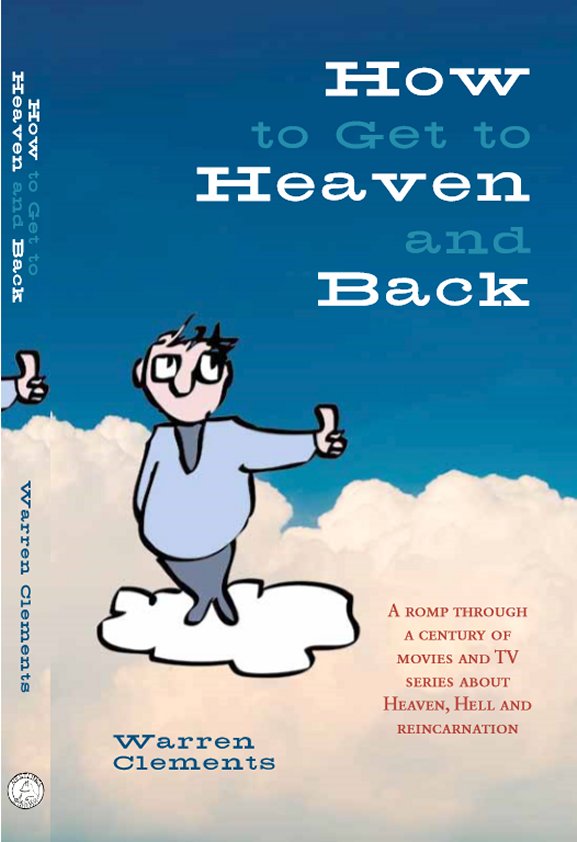 For more than a century, the movies have imagined what Heaven and Hell must look like, and what God and Satan might look like, and how reincarnation works. The interpretations are all over the map. One day, God is George Burns; the next, God is Alanis Morissette. Heaven may be a land of clouds, or a Technicolor paradise, or a black-and-white bureaucracy. Warren Clements takes an amusing spin through such films as Here Comes Mr. Jordan, Defending Your Life and Oh! Heavenly Dog. There are a few TV series, too.

...to try to murder him again, even though they won’t know that it’s Joe Pendleton inhabiting the body and turning Farnsworth’s evil company into a corporate good guy. God may be omnipotent, but his helpers can make the Three Stooges look like brain surgeons.
We learn from this film that people going to Heaven have to line up on fluffy white clouds to board a giant plane, in black and white no less, though that may be because the movie is in black and white. The movie was remade as:
Heaven Can Wait (1978), in which Warren Beatty plays Joe Pendleton, now a football player, who winds up in the body of Leo (not Jonathan) Farnsworth. To further confuse matters, Heaven Can Wait was the title of the unproduced 1938 play by Harry Segall on which Here Comes Mr. Jordan was based, and it was also the title of a ... film with Don Ameche set in Hell, not Heaven. But the 1978 movie was as good in its own way as Here Comes Mr. Jordan, and Beatty was even nominated for a best-actor Oscar, which he lost to Jon Voight for Coming Home.
..how does Heaven look?.... Well, the movie was remade yet again as:
Down to Earth (2001), in which Chris Rock plays Lance Barton, a standup comic who is scooped up by the heavenly messenger Mr. Keyes (Eugene Levy) a second before a truck might have hit him. Same old story; Mr. Keye’s boss, Mr. King (Chazz Palminteri), allows Lance to pick a new body – but the one on option is white, while Lance is black. The delivery of Lance’s black-focused standup routine from a middle-aged white guy is provocative, although since viewers see only Rock (except for a few flashes of the white guy), we have to imagine how the white guy would look delivering such lines as ..... 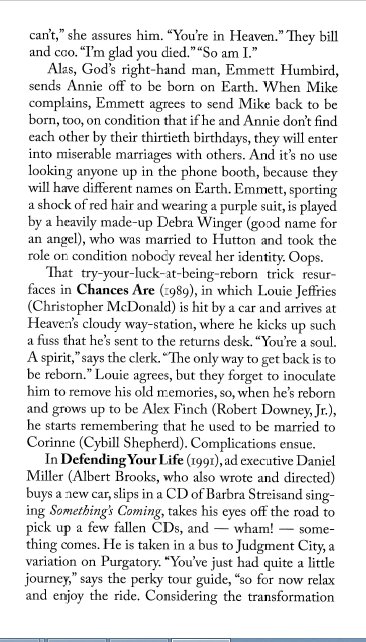 Made in Heaven (1987), which kills off the young hero, Mike Shea (Timothy Hutton), as soon as the opening credits roll. He winds up in a pastel heaven and falls in love with Annie Packert (Kelly McGillis), who was born in Heaven. “What if I imagine something bad?” he asks. “You can’t,” she assures him. “You’re in Heaven.” Alas, God’s right-hand man, Emmett, sends Annie off to be born on Earth. When Mike complains, Emmett agrees to send Mike back to be born, too, on condition that if he and Annie don’t find each other by their thirtieth birthdays, they will enter into miserable marriages with each other. And it’s no use looking anyone up in the phone booth, because they both have different names on Earth. Emmett is played by a heavily made-up Debra Winger, who was married to Hutton and took the role on condition nobody reveal her identity. Oops.

Hey, Look Who God Is

God has shown up in so many films, played by so many actors and actresses, that he must be due for a union card. For the record, in Otto Preminger’s cloth-eared attempt at comedy, Skidoo, Groucho Marx played a character named God, but he was not the Almighty. He was a gangster living on a yacht. For the true – well, cinematically true – God, we must turn to:
Dogma (1999), which lets gazillion-selling singer Alanis Morissette play God without dialogue. She appears in a sort of tunic and looks severely at ... (Ben Affleck), who dissolves into tears. The Voice of God (Alan Rickman) warns, “Anyone who isn’t dead or from another plane of existence would do well to cover their ears right about now,” at which point God shouts very, very loudly. Then she exchanges her tunic for a shiny silver top and white tutu, kisses Jay (of Jay and Silent Bob), and does a handstand. Much as you would expect God to do. Affleck and Matt Damon play fallen angels who plan to use a loophole to re-enter Heaven, the catch being that the universe as we know it would end. There are entirely different shenanigans in:

Bruce Almighty (...), in which Morgan Freeman appears as God to ... (Jim Carrey). At one point, Carrey places an important call by dialling 555-0123. At least, that’s the identifiably fake number (555 is a phantom code) that he dials on the home-video version. When the movie first played in theatres, the phone number was a real one. Director Tom Shadyac says, “I thought we owned [that number], but for some reason there was some problem and people were actually getting calls.” Burning question: Who are these people who keep trying out the phone numbers they see in movies? In:
Evan Almighty (...), God (Morgan Freeman again) gives Noah-like powers to ... (Steve Carell) the way he gave God-like powers to Carrey’s character. This meant gluing increasingly elaborate wigs and beards to Carell’s head (the process at times took four to six hours, starting at 2 a.m.) and the corralling of 200 animals from 75 different species, including spitting alpacas. If you’re ever tempted to build and stock your own ark, the DVD of Evan Almighty offered a few tips. Skunks like cheese, foxes love chicken, and squirrels are fondest of pecans, so feed them pecans when they’re working and other nuts when they’re off the clock.