Meet the Shakespeares collects fifteen musical skits based on Shakespeare's plays, plus a situation comedy based on Hamlet . The skits, written by Warren Clements , were performed between 1995 and 2012 as part of the annual spring show at The Arts & Letters Club in Toronto . The book is wittily illustrated by Brian Gable. 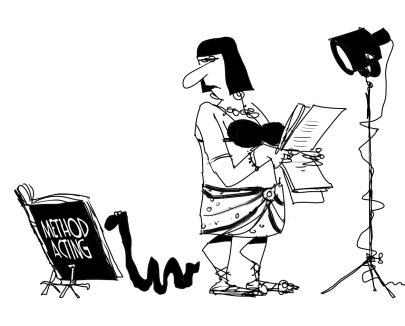 I thought of taking cyanide, but I can’t stand the taste.
And if I set myself on fire, these clothes would go to waste.
It’s just like in that poem by Dorothy Parker,
Who crossed off every option with her magic marker.
If I should die before I wake ... blame the snake.

From Cleopatra’s Needle I could take a mighty fall,
Or maybe smash my chariot against the nearest wall.
The trouble is these episodes could hurt me,
And at the crucial moment courage might desert me.
If I should die before I wake ... blame the snake.

They haven’t built the rifle, and I don’t enjoy the rope,
And if I used a razor, I would really be a dope.
It looks as though the snake may be the answer,
And spell an easy finish for this great romancer.
If I should die before I wake ... blame the snake.